What is Colonial Style Architecture?

With its grand stature and signature look, Colonial architecture hearkens back to the nascent days of British settlement on American soil. Since then, the classic home style has seen waves of renewed interest, giving rise to multiple variations on the colonial theme. Today, they remain a popular choice for homeowners throughout the Eastern and Southern United States.

Like the Cape Cod home style, the roots of Colonial architecture took shape as European settlers made their way to American shores and began to develop their homesteads. A century later amid the country’s centennial celebrations, a new wave of interest in colonial homes took hold. This gave way to the Colonial Revival period, which saw architects and home builders molding the settlers’ early home designs into something more suited for the needs of modern life. Several variations were born during this time, including Georgian, Dutch, French, and others. 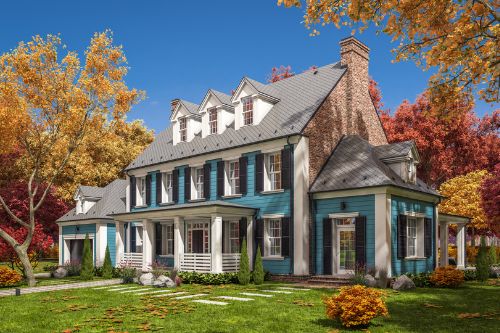 What is Colonial Style Architecture?

Colonial homes are easily identifiable, with symmetric and traditional exteriors that allow their signature characteristics to stand out. Their spacious interiors prioritize comfort, with common living areas and bedrooms typically located on different stories. Here are some common elements of colonial home design.

To learn more about the various home styles from A-Frame to Victorian, head to our Architectural Styles page.

Related Articles
Design What is a Rambler House? 5 Features of Ranch-Style Architecture The distinct rambler architectural style is known by several names: rambler, ranch house, California ranch, and more. Whatever you call it, it has played an important role in the evolution of the American home. From its spacious interior to its welcoming layout, these homes are tailor-made for a comfortable home life. History of the Rambler […]
Design Pantone 2023 Color of the Year: How to Use Viva Magenta in Your Home Another year, another statement from the Pantone Color Institute, the leading authority on all things color design. The global color expert recently announced their Color of the Year for 2023: Viva Magenta. A beautiful hue of the red family, it is vibrant and soothing at the same time. Just like last year’s selection, Very Peri, […]
Design 5 Interior Design Trends for 2023 The interior design trends of 2022 included a renaissance of colorful decorating, a preference for sustainable materials, and incorporating nature throughout the home. They reflected the continued evolution of our lifestyles in recent years and showed an overall desire for our homes to be somewhere we can relax, decompress, and focus on our wellbeing. With […]