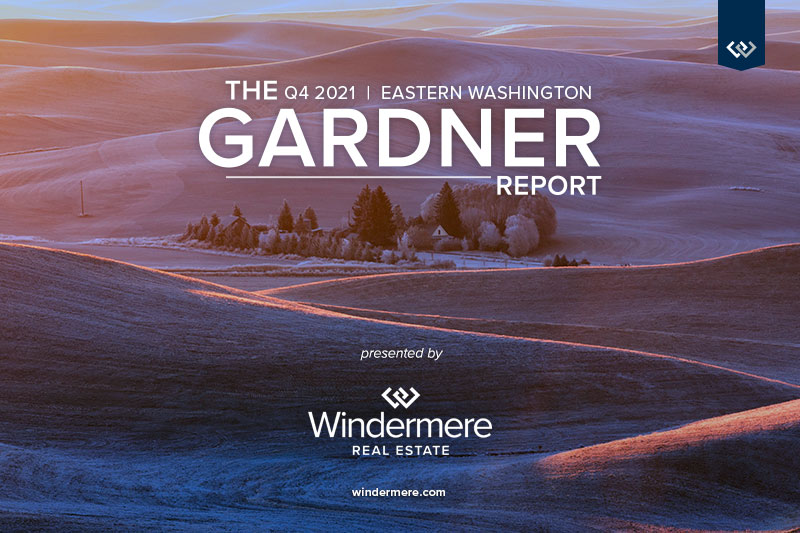 The Eastern Washington economy has proved remarkably resilient to the effects of the pandemic, having recovered all of the jobs that were lost and adding more than 20,500 more. Every county except Whitman shows employment levels above their pre-pandemic peak. It should be added that this report considers total employment, not just non-agricultural jobs, so the numbers are higher than might be expected. With the job market expanding at a solid pace, it is not a surprise to see the unemployment rate continuing to trend lower. As of November 2021 (the most recent data available), only 3.4% of the workforce was unemployed—down from the pandemic peak of 14.9%.

❱ The number of home sales was disappointing, and though we might suspect the slowing is due to a lack of homes for sale, listings were down by less than 1%, which makes the drop in sales somewhat puzzling.

❱ Year-over-year, sales rose in two counties but fell in the other five. Compared to the third quarter, sales fell everywhere but Franklin County.

❱ Whether it was the rise of new COVID-19 infections, inclement weather, or rising mortgage rates, the main culprit behind the slowdown in sales is unclear. I will be very interested to see how the market performs in the first quarter of the new year. 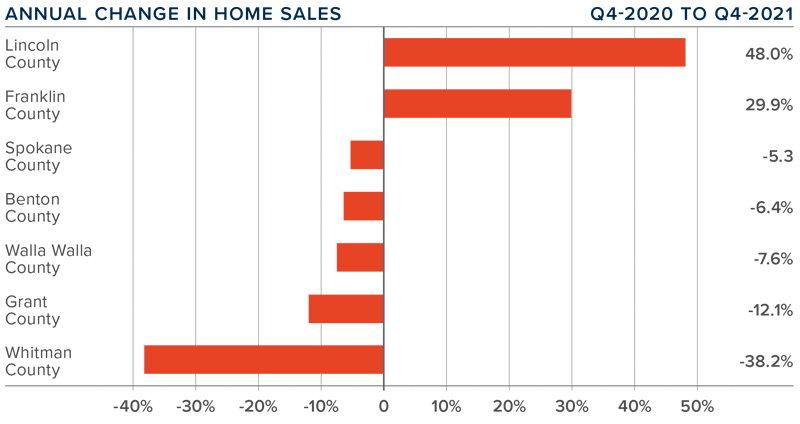 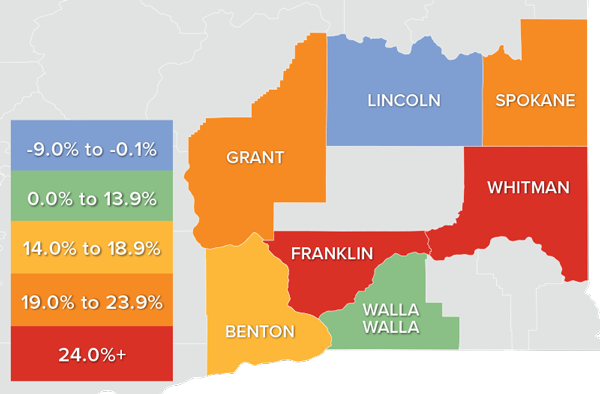 ❱ Year-over-year, the average home price in Eastern Washington rose a very significant 21.3% to $423,870 but pulled back by a modest .4% compared to the third quarter of the year.

❱ When compared to third quarter, prices rose in Benton, Franklin, and Walla Walla counties. Prices remained static in Lincoln County and dropped in the rest of the market areas.

❱ Lincoln County saw prices drop compared to the previous year, but it is a small market, which makes it prone to significant swings. The balance of the counties contained in this report saw prices rise at double-digit rates across the board.

❱ Mortgage rates rose .3% between October and the end of the year, which may have impacted near-term price growth. That said, Spokane County is now technically unaffordable for a buyer making the median income and every county other than Lincoln is unaffordable for first-time buyers. Price growth is likely slowing due to lower affordability. 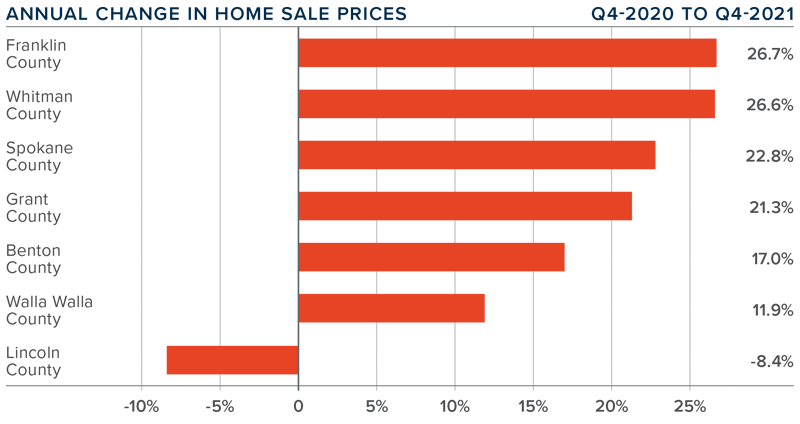 ❱ The average time it took to sell a home in Eastern Washington in the final quarter of 2021 was 24 days.

❱ During the quarter, it took seven fewer days to sell a home in Eastern Washington than it did a year ago.

❱ All markets other than Lincoln saw the average number of days-on-market drop compared to the same period in 2020, with significant declines in Walla Walla (-23 days) and Whitman (-13 days) counties.

❱ It took ten more days to sell a home in the quarter than it did during the third quarter of this year. 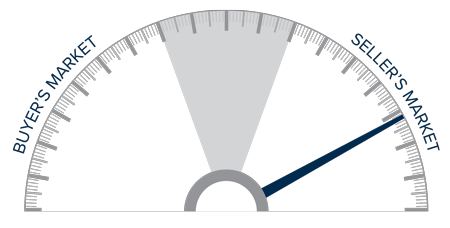 Solid employment gains continue in Eastern Washington, but the housing market appears to have taken somewhat of a breather. Housing data for the winter months can be a little frenetic, but the signs of a slowdown are there. Although it is far too early to suggest that this is the case, it will be interesting to see how the market performs in the spring, especially considering rising mortgage rates and falling affordability levels.

Ultimately, only time will tell, but it seems that the Eastern Washington market is poised for a move back to some sort of balance—at least given the current data. As such, I have moved the needle a little toward home buyers, but it remains a seller’s market.