Year over year, total employment in Eastern Washington rose by just under 10,000 jobs, which is an annual growth rate of 2.1%. Benton County had the fastest pace of job growth at 3.8%. Also notable were Spokane and Franklin counties, where job growth rose 2.9%. Annually, employment shrank in Whitman and Lincoln counties. Unadjusted for seasonality, the regional unemployment rate was 4.6%; the seasonally adjusted rate was 5%. The highest jobless rate was in Franklin County at 5.3%. The lowest rate was in Walla Walla County at 4%.

❱ During third quarter, 3,305 homes sold, which was 21.8% lower than a year ago. Transactions fell 4.6% compared to the second quarter of this year.

❱ Listing activity rose 97.2% compared to a year ago and was 74.9% higher than in the second quarter.

❱ Year over year, sales fell across the region. Additionally, sales fell in all the markets covered by this report compared to the second quarter of 2022.

❱ Even with more choice in the market, pending sales fell more than 14%, suggesting that significantly higher mortgage rates are now having an impact on the market. 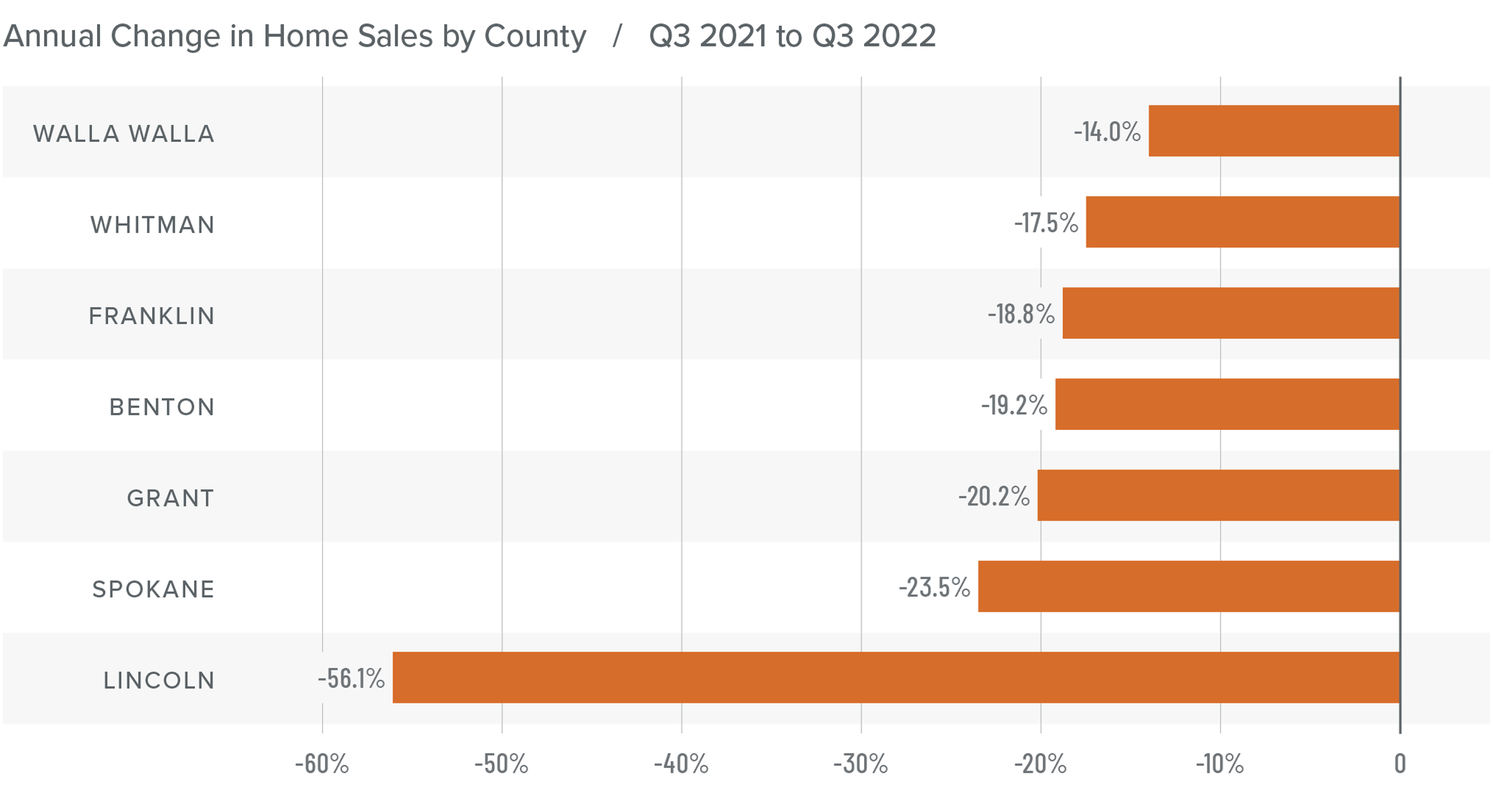 ❱ Year over year, the average home price in Eastern Washington rose 8.8% to $463,324, but average prices were down 2.7% compared to the second quarter.

❱ Compared to the second quarter of 2022, prices fell in all counties except Benton, Lincoln, and Whitman.

❱ Significantly higher mortgage rates are starting to impact the market, which has led median list prices to drop in Spokane, Franklin, Whitman, and Grant counties compared to the previous quarter. 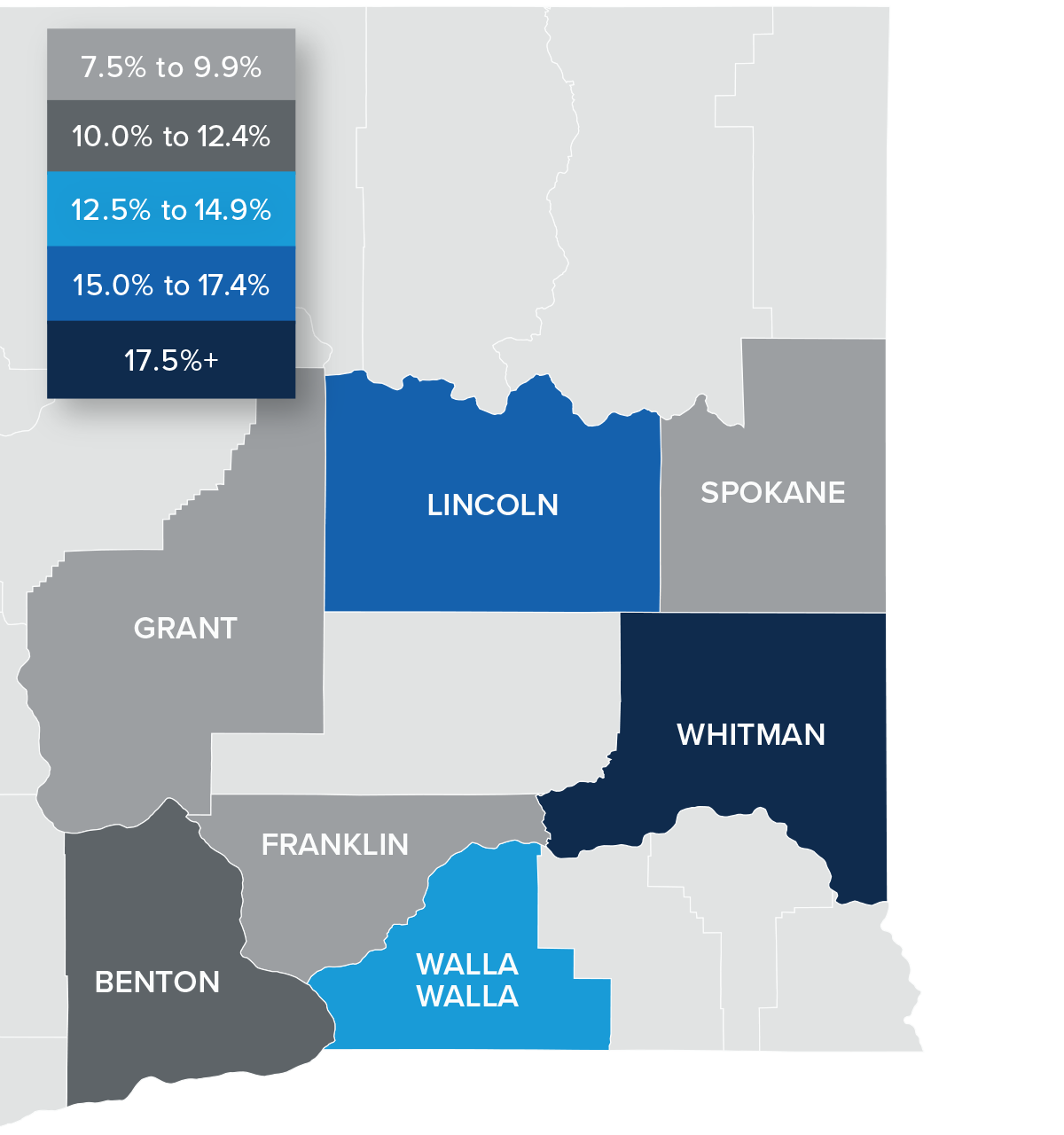 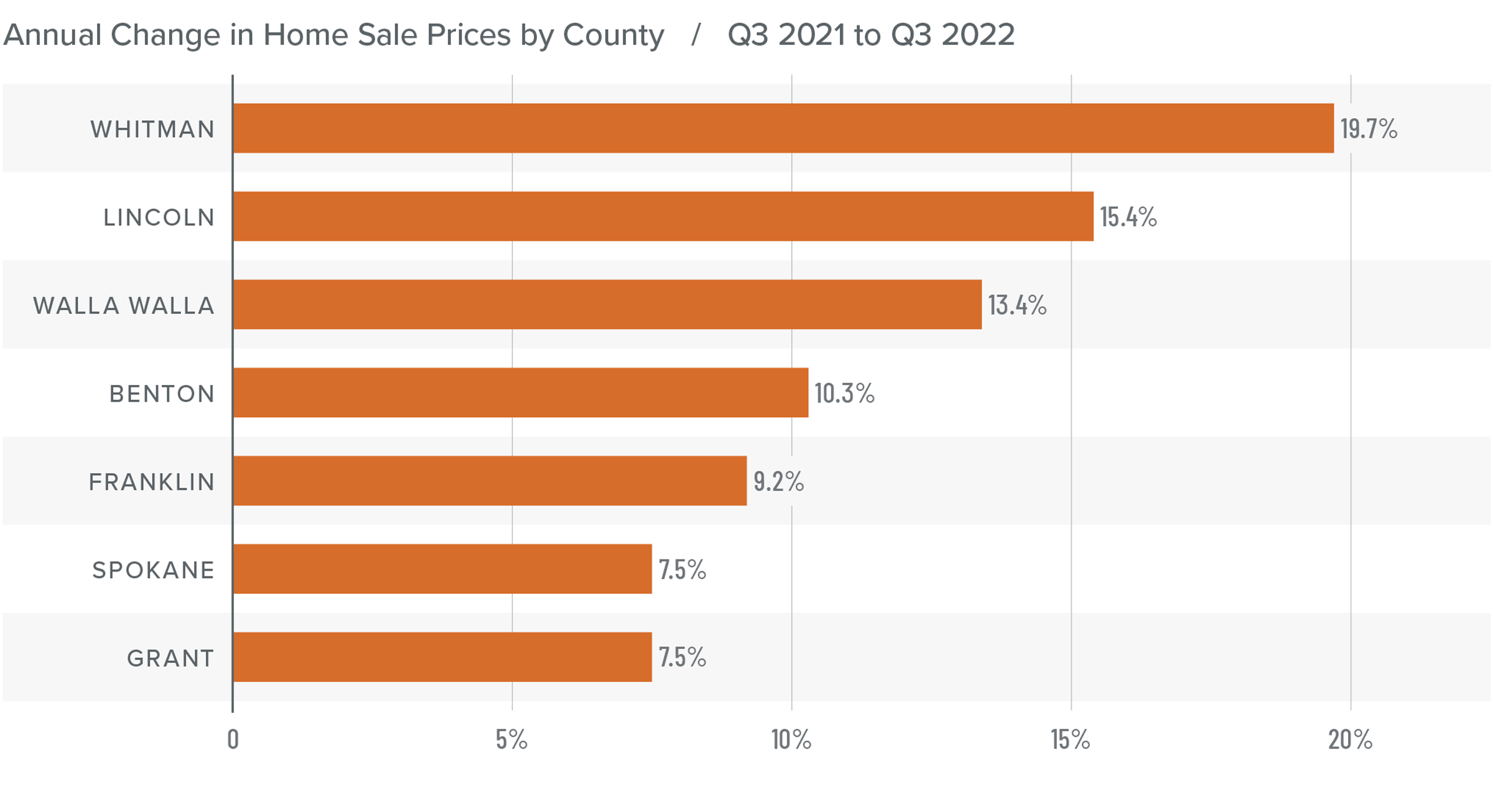 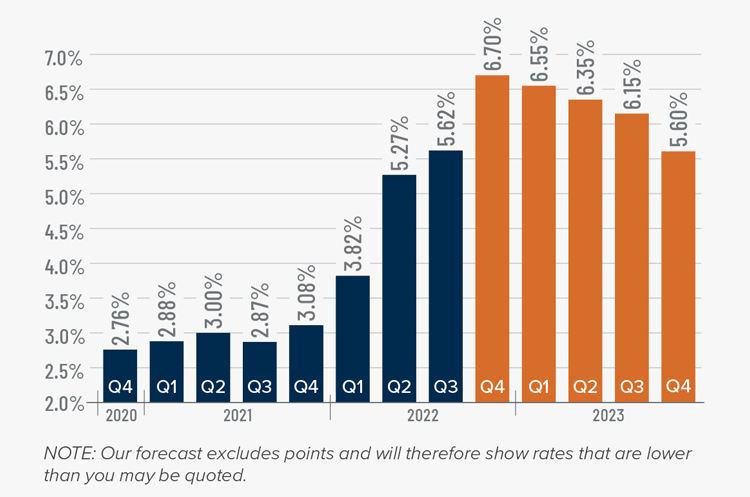 ❱ The average time it took to sell a home in Eastern Washington in the third quarter of 2022 was 24 days, which is 9 more days than during the same period a year ago.

❱ Compared to the second quarter of this year, average days on market rose in every county. The regional average rose by 6 days to 24.

❱ All counties saw the average number of days it took for a house to sell rise compared to the third quarter of 2021.

❱ Longer market time can be attributed to more inventory combined with higher financing costs, which have led some buyers to wait for mortgage rates to stabilize and/or for prices to drop further. 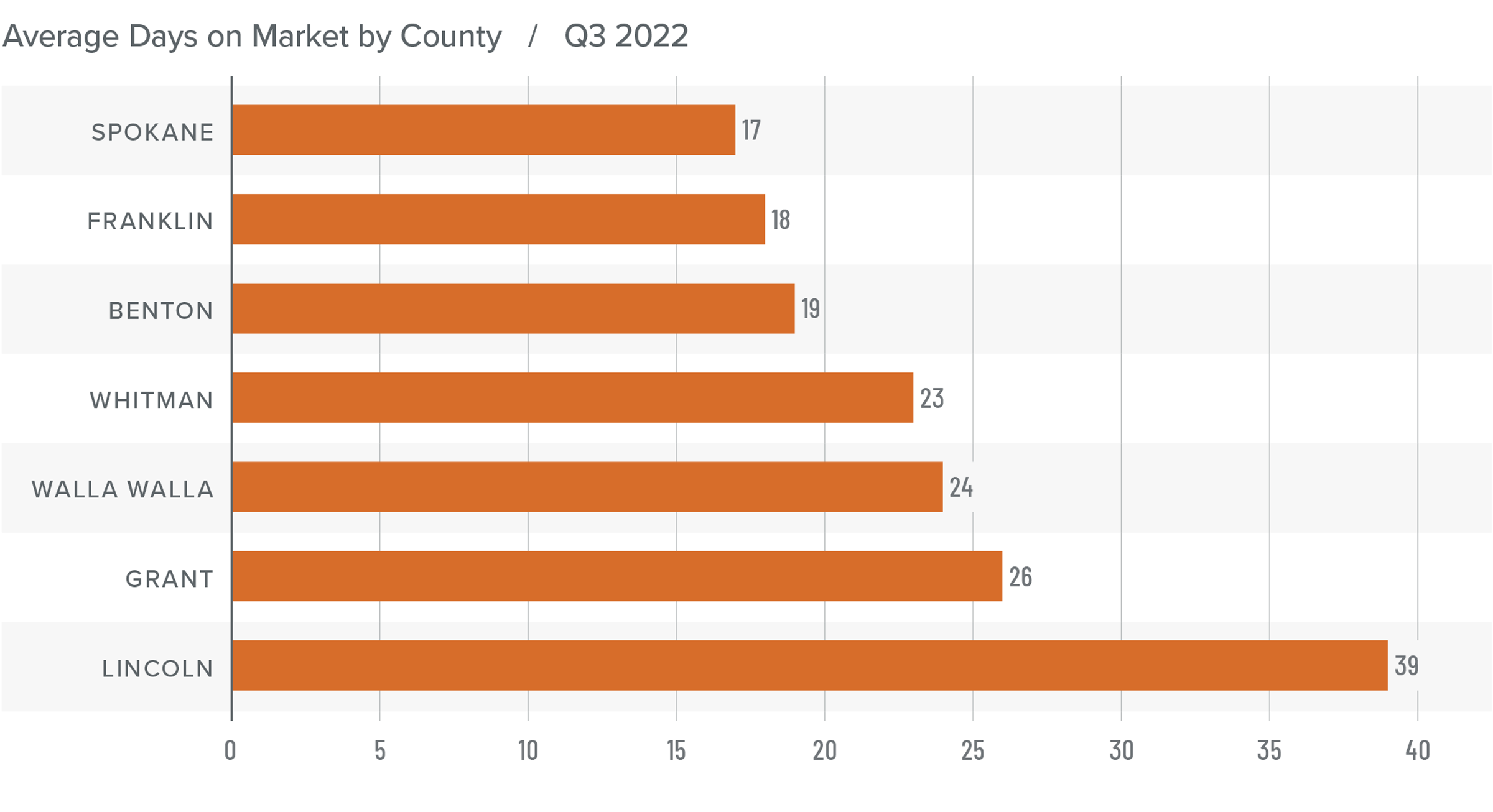 Regionally speaking, the job market continues to expand, which should be a benefit for the housing market. However, with mortgage rates rising more than 2.7% from a year ago, many buyers are now being priced out of the market. The third quarter was an inflection point in which higher financing costs are now acting as a significant headwind. I anticipate that the market will struggle until rates stabilize. Even then, affordability will remain a factor. Ultimately, prices are expected to pull back to account for higher mortgage rates, but I don’t believe there will be any systemic price correction. Rather it will be a reversion that will allow the market to move to a more sustainable pace of price growth. 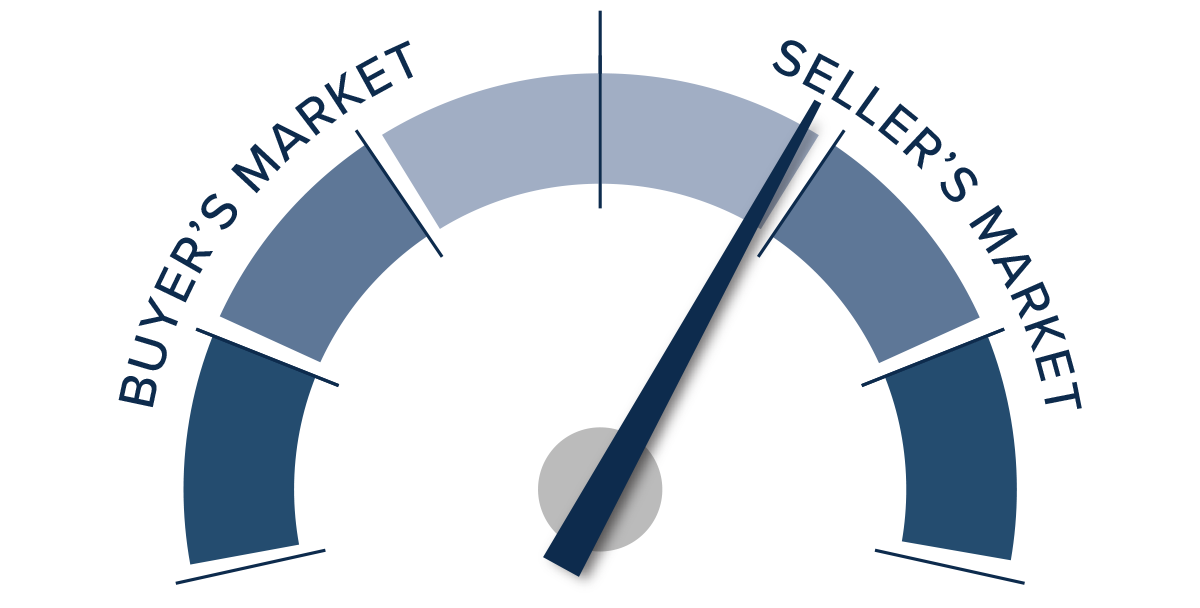 As such, I have decided to move the needle more in favor of home buyers as the region heads toward a more balanced market—one we have not seen in quite some time.