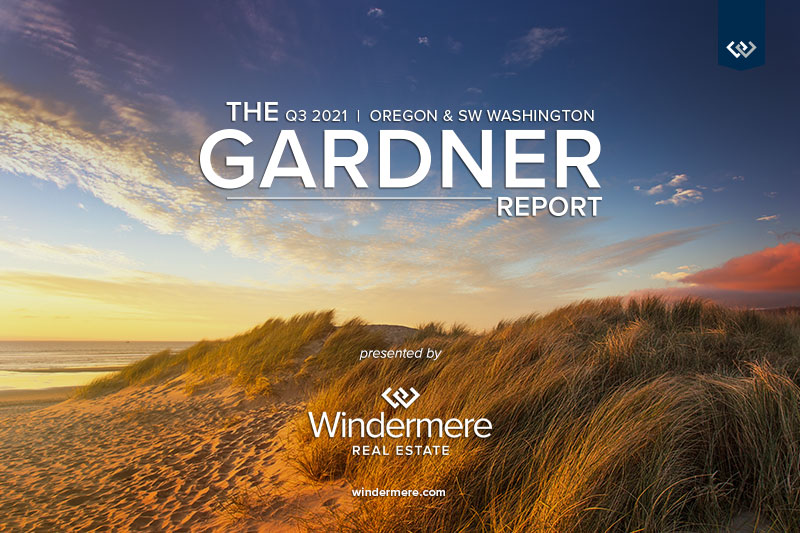 The following analysis of the Oregon and Southwest Washington real estate market is provided by Windermere Real Estate Chief Economist Matthew Gardner. We hope that this information may assist you with making better-informed real estate decisions. For further information about the housing market in your area, please don’t hesitate to contact your Windermere Real Estate agent.

Following a significant slowdown in the pace of the job recovery in Oregon this summer, employment growth was picking up until rising COVID infections started to impact the country, which led to lower hiring. Of the more than 285,000 Oregon-based jobs that were shed at the onset of the pandemic, 204,700 have returned. Oregon is still down by almost 81,000 positions. The Southwest Washington area also saw a similar slowdown, but it is a far smaller market and, therefore, less impacted. In fact, this area has now recovered all but 600 of the more than 22,000 jobs that were lost. Oregon’s unemployment rate has fallen below 5% but remains 1.5% higher than before the pandemic hit. Notably, the jobless rate in Southwest Washington currently stands at 4.7%, only marginally above the pre-pandemic low of 4.3%.

❱ Sales were higher in all but five counties compared the second quarter, but the drop in sales was very small in all of these markets.

❱ Sales activity was mixed across the region, with sales rising in 9 counties and dropping in 17. Benton, Linn, and Cowlitz counties saw significant increases. The greatest drop in sales was in Tillamook County, but small markets often exhibit significant swings, so this doesn’t concern me at the moment.

❱ Although demand has softened, low inventory levels have slowed the market modestly. I am hopeful the market will see an uptick in the number of listings, but I do not expect there will be enough to meet demand until next spring. 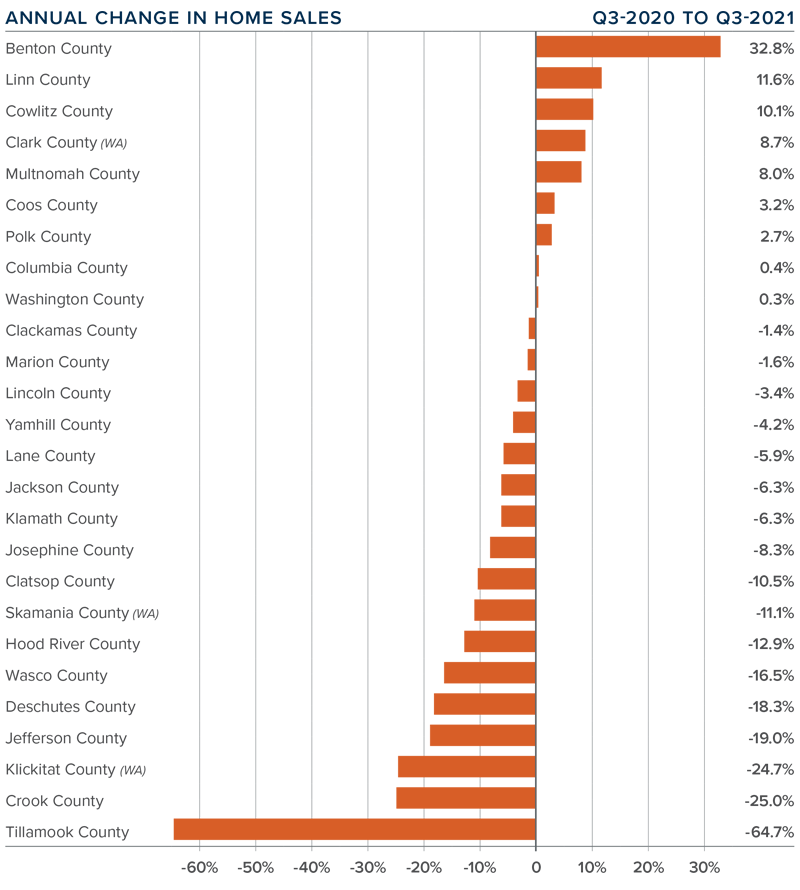 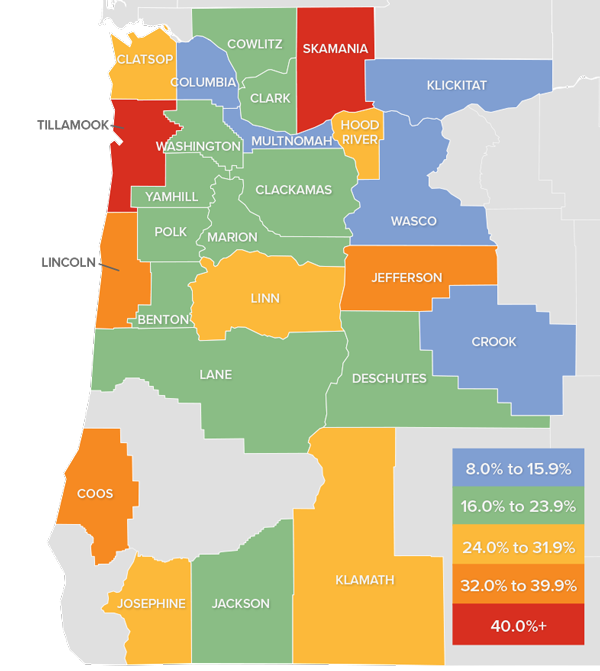 ❱ Four counties—Crook, Hood River, Multnomah, and Tillamook—saw home prices drop, but the change was minimal and not a cause for concern.

❱ All counties contained in this report had higher home prices than a year ago, with very significant increases in Tillamook and Skamania counties. All but two counties saw double-digit appreciation.

❱ Home prices have been running very hot and must start to cool at some point. While I am forecasting mortgage rates will increase in 2022, it will not be enough to impact prices significantly. However, diminishing housing affordability in many markets will start to slow appreciation, which should come as a relief to home buyers. 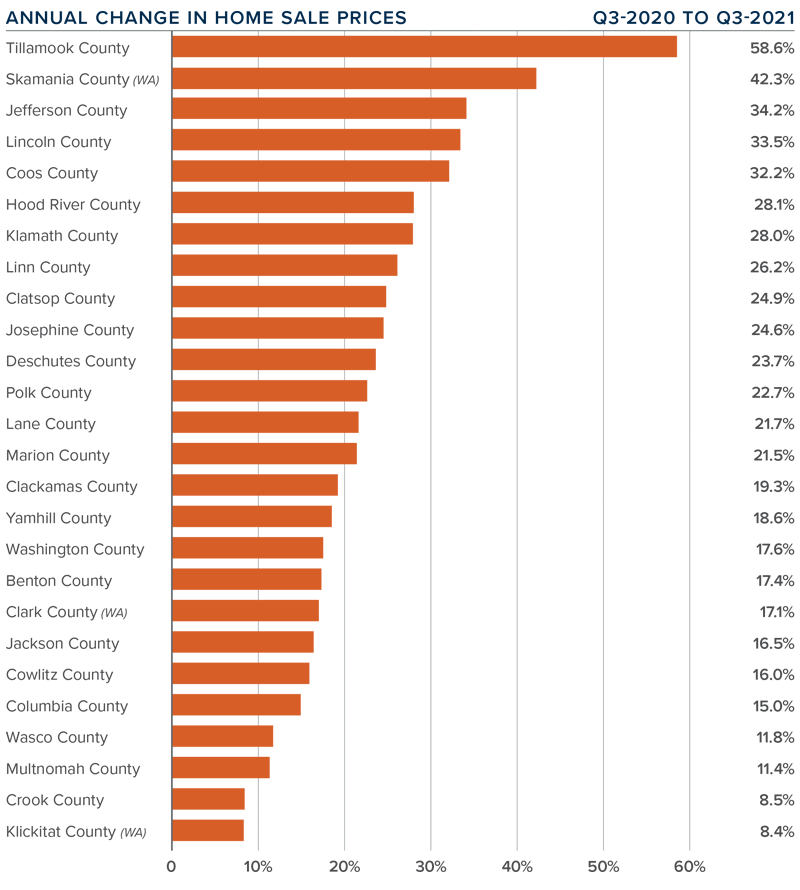 ❱ All counties saw the length of time it took to sell a home drop compared to a year ago, but half of the counties contained in this report saw market time increase compared to the second quarter of 2021.

❱ Homes again sold the fastest in Washington County, where it took an average of only 11 days for a home to sell. An additional 17 counties saw average market time drop to below a month.

The region’s housing market is sending mixed messages, with the pace of sales, price growth, and days on market starting to slow in some areas. Overall, the data is still very positive, but buyers continue to be hobbled by low levels of inventory and many simply aren’t prepared to pay what is being asked. This is evident given the change in list prices, which have softened in many markets.

While the housing market remains staunchly in favor of sellers, I think we are slowly reaching an apex and may start to move toward a more balanced market. However, I don’t see that happening until next year, and it’s not guaranteed. Home sellers still have the upper hand but, given all the factors described in this report, I am leaving the needle in the same spot as last quarter.