The following analysis of select counties of the Oregon and Southwest Washington real estate market is provided by Windermere Real Estate Chief Economist Matthew Gardner. We hope that this information may assist you with making better-informed real estate decisions. For further information about the housing market in your area, please don’t hesitate to contact your Windermere Real Estate agent.

Oregon added 20,400 new jobs in the first quarter of 2022, leaving the state only 36,000 shy of its pre-pandemic peak. I predicted in the fourth quarter 2021 Gardner Report that a full job recovery would occur by this summer. If the current pace of job growth continues, that forecast will be accurate. The Southwest Washington economy— being far smaller—recovered all the jobs lost to COVID-19 last summer. Employment levels in Klickitat and Skamania counties are still modestly lower than before the pandemic, but solid growth in Clark and Cowlitz counties more than offset the shortfall elsewhere. Oregon’s unemployment rate was 3.8%, which is still lower than the pre-pandemic low of 3.4% but impressive all the same given the growing labor force. The jobless rate in Southwest Washington was 5.1%.

❱ Compared to a year ago, sales rose in more than half of the markets in this report. The areas where sales fell were mainly small markets that can fluctuate dramatically. That said, sales dropped in the more populous Clackamas and Lane counties, but I attribute this to low inventory levels.

❱ Although the number of transactions dropped significantly from the final quarter of 2021, this was more a function of inventory constraints than slack demand.

❱ Listing activity has not seen its spring bump yet, and it will be interesting to see if this happens sooner than usual given the spike in mortgage rates in the first quarter. 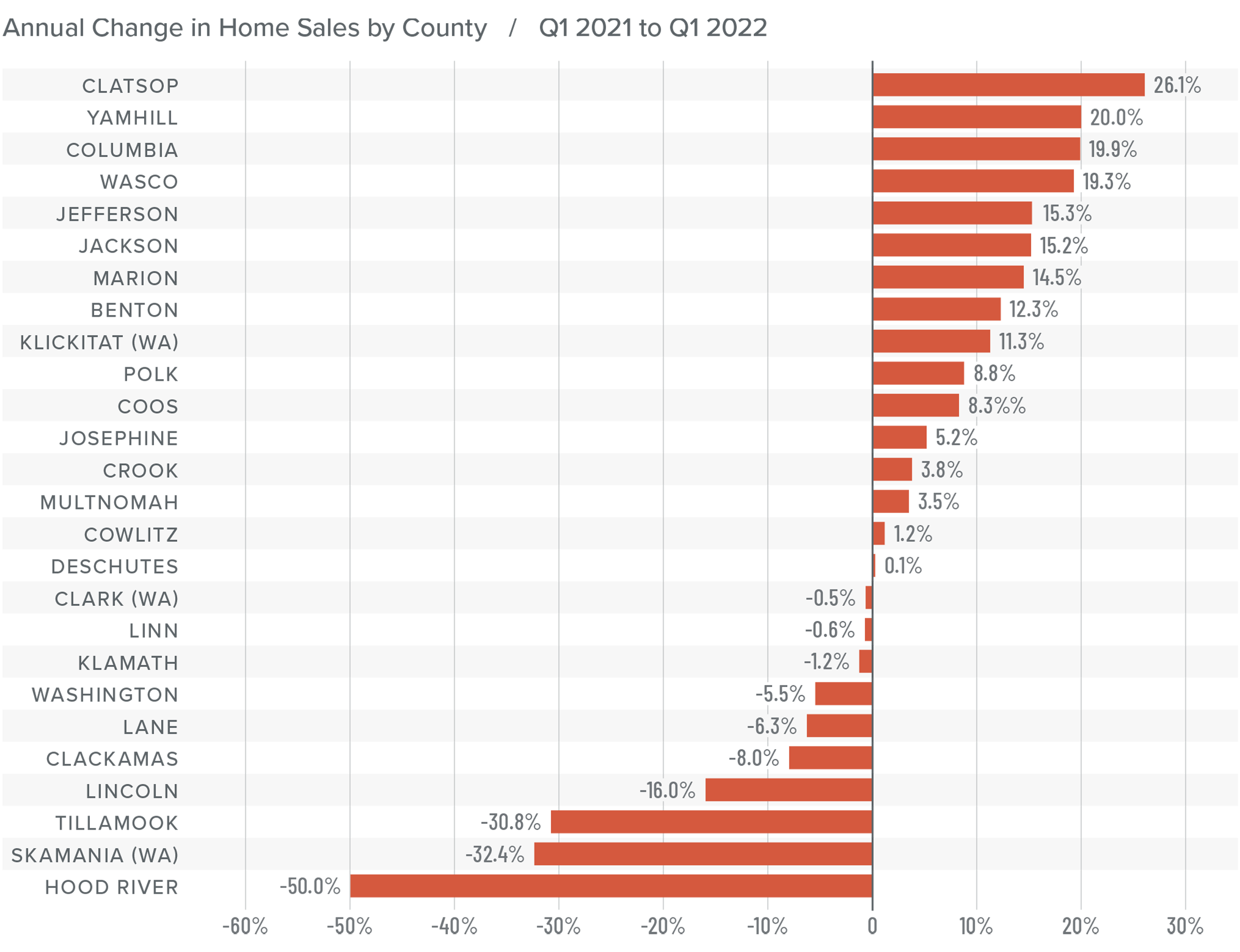 ❱ The pace of home-price growth is still tapering, yet prices rose by 13.2% year over year, which is well above the state’s long-term average.

❱ Compared to the final quarter of 2021, average prices rose 2.5%, which is particularly impressive given rising financing costs.

❱ All counties contained in this report except Hood River had higher sale prices than a year ago, with significant increases in Tillamook and Columbia counties. Almost three-quarters of the markets saw prices rise more than 10%.

❱ The spike in mortgage rates has yet to have a significant impact on prices. However, it will be interesting to check back in the second quarter because if there is an impact, this is when we would likely see it. 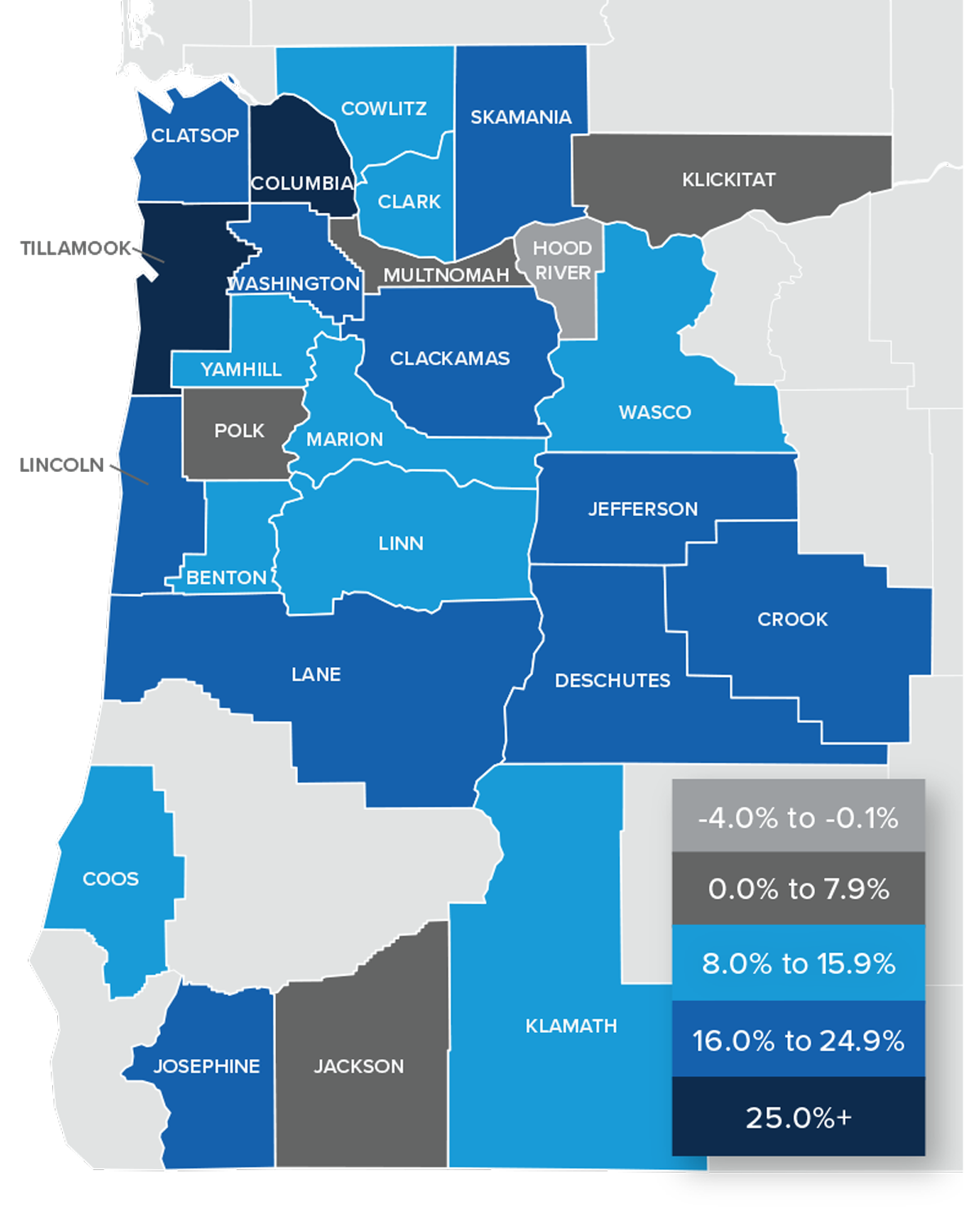 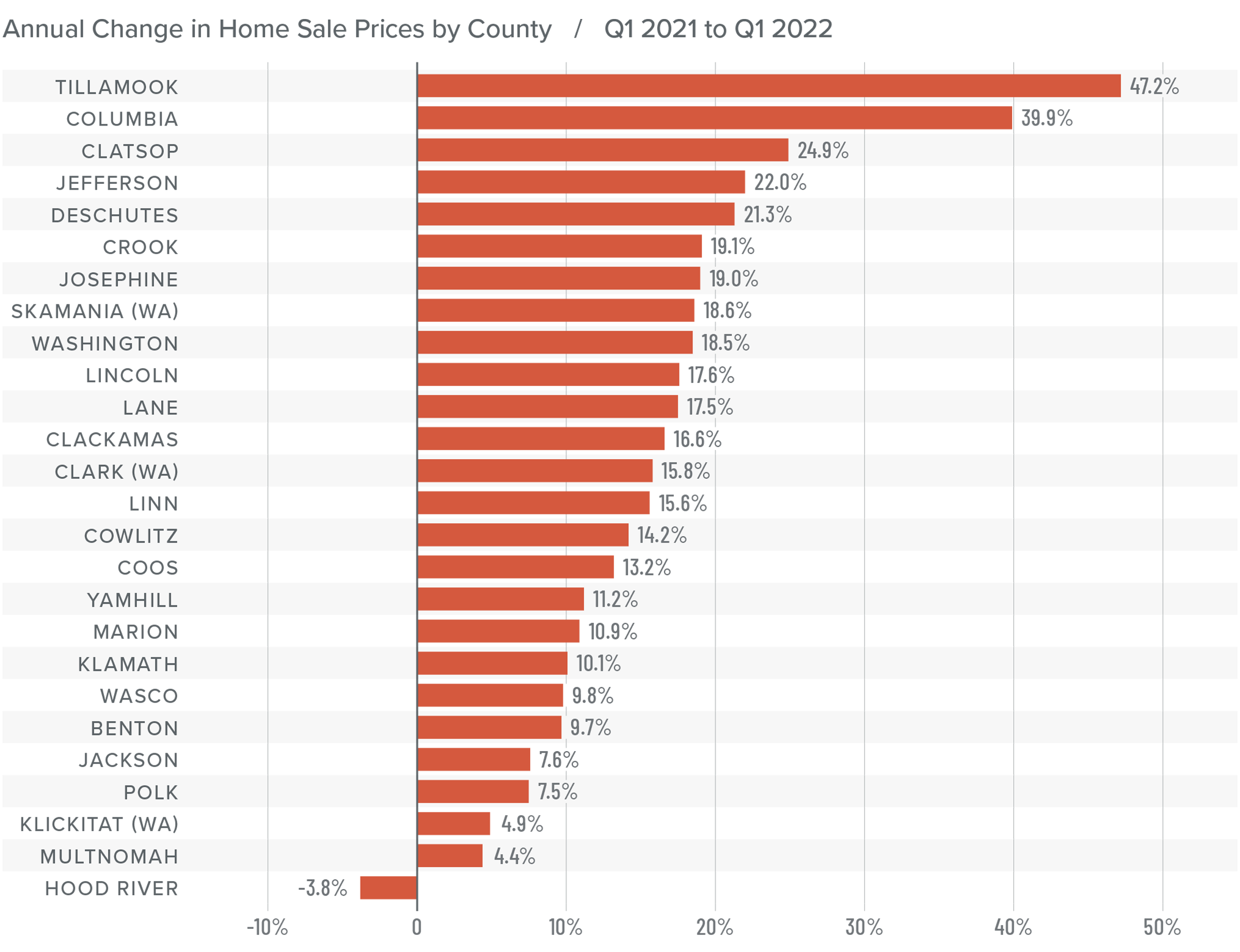 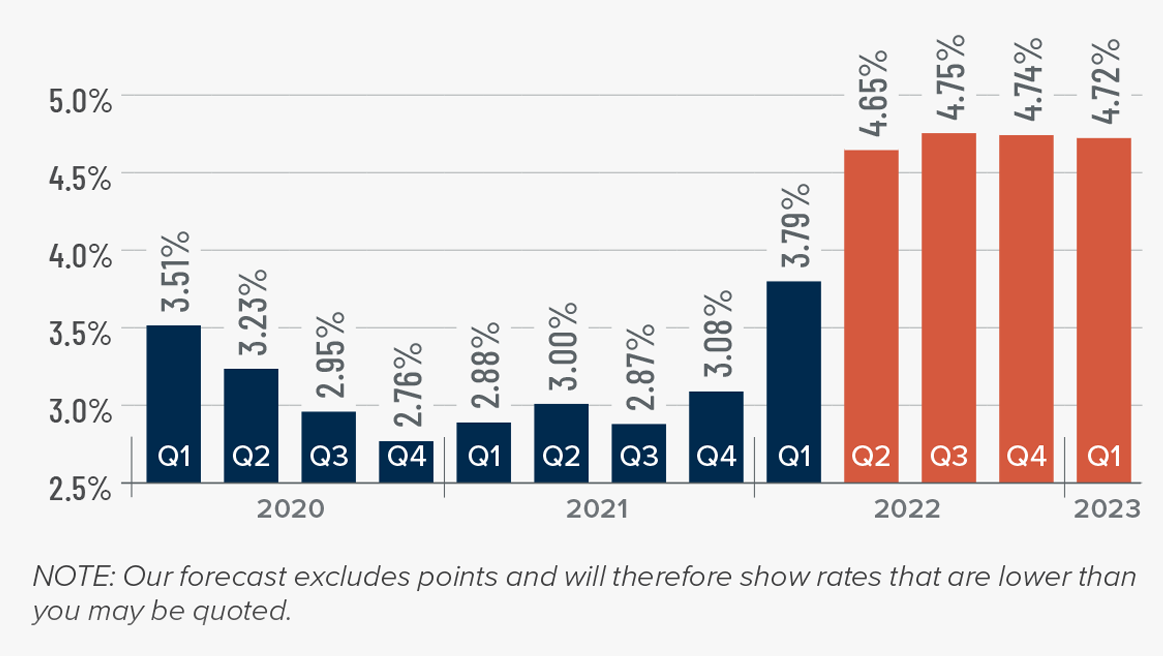 ❱ The average number of days it took to sell a home in the region dropped by six compared to a year ago, but it took ten more days for a home to go under contract compared to the fourth quarter of 2021.

❱ Sixteen of the 26 counties covered in this report saw days on market drop from the first quarter of 2021, but only 5 counties saw average market time drop compared to the fourth quarter of last year. This is likely a function of seasonality, and I expect this to correct itself as we enter the spring buying season.

❱ Homes sold the fastest in Washington County, where it took an average of only 15 days for a home to sell. An additional seven counties saw an average market time of less than a month. 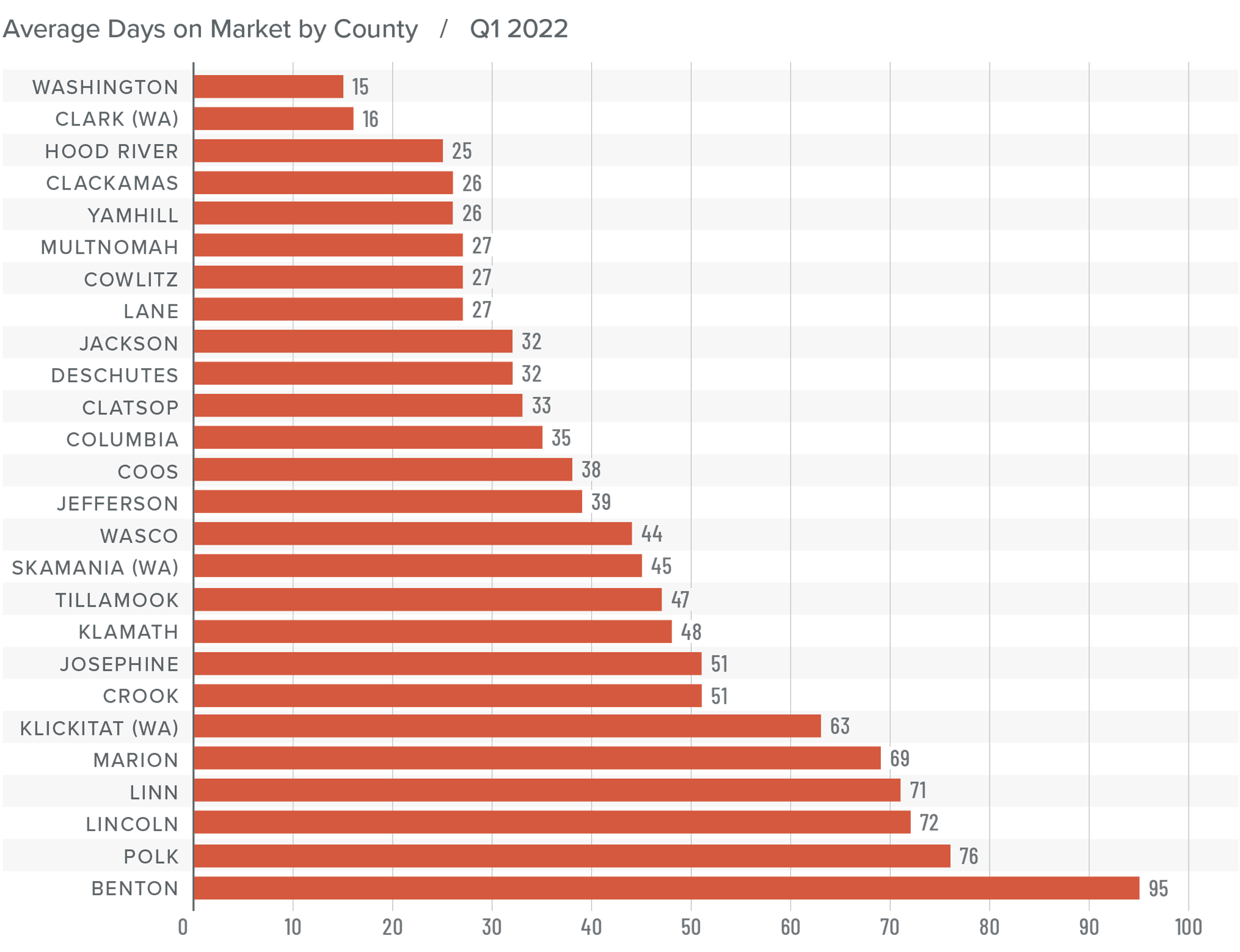 Despite higher rates and rising prices, buyers continue to be very motivated. As such, I don’t foresee any significant downturn in demand. However, home price growth could start to taper in the coming months, which is not a bad thing. 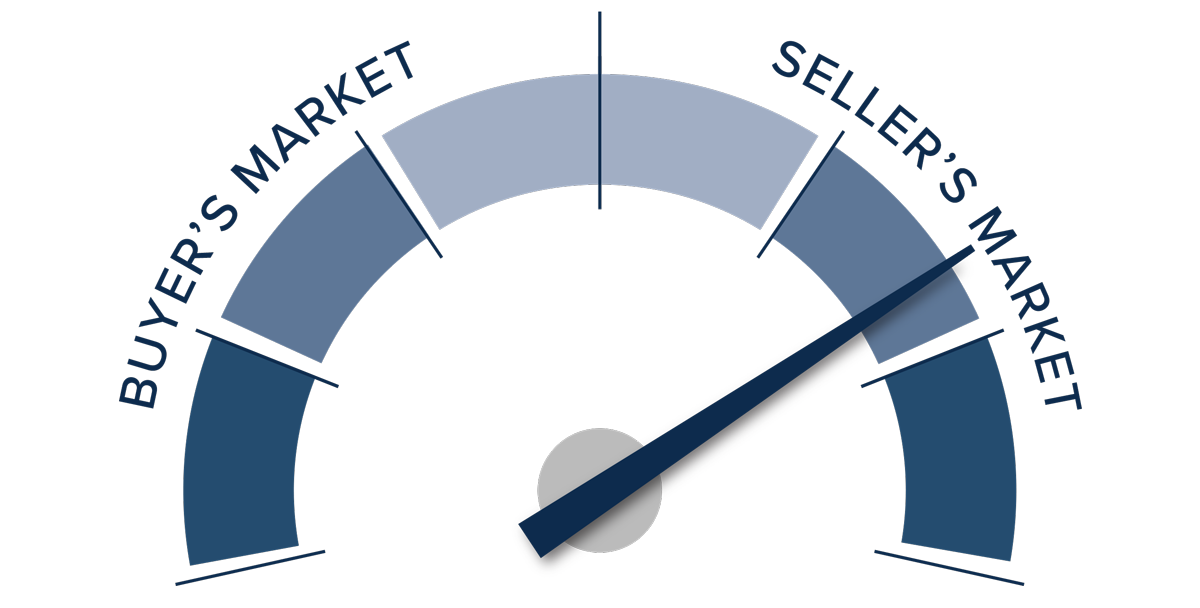 Given remarkably low inventory levels and solid demand, home sellers still have the upper hand, though we will have to wait and see how prices will be impacted by higher mortgage rates. As such, I am leaving the needle in the same position it was last quarter.