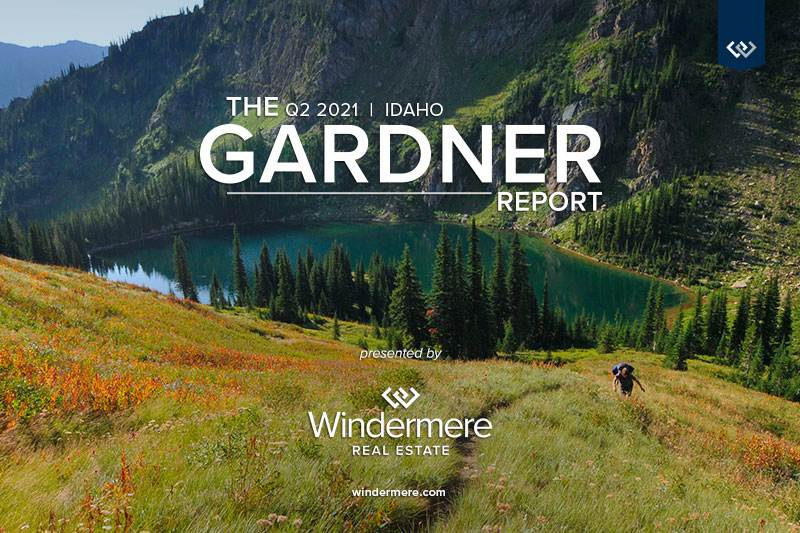 The following analysis of select counties of the Idaho real estate market is provided by Windermere Real Estate Chief Economist Matthew Gardner. We hope that this information may assist you with making better-informed real estate decisions. For further information about the housing market in your area, please don’t hesitate to contact your Windermere Real Estate agent.

The post-COVID job recovery continues at an impressive rate. As discussed in last quarter’s Gardner Report, the state has not only recovered all of the 79,600 jobs that were shed during the pandemic but has added 16,300 new positions. Utah remains the only other state that can make this claim. With such a strong recovery, and additional new hiring, it is no surprise to see the unemployment rate continuing to trend lower. It currently stands at only 3%—almost half the national rate of 5.9%. New COVID-19 cases have risen in recent weeks, but not to a level that is likely to slow down the state’s robust rate of economic growth. That said, if there are significant increases in infections, it may take some of the momentum away. I remain hopeful this will not be the case.

❱ In the second quarter, 6,023 existing homes sold, representing a drop of 4.7% year over year. However, because the pandemic was in full swing a year ago, I think it’s more meaningful to consider the second quarter sales increase of 21.7% relative to the first quarter of this year.

❱ Due to the pandemic, comparing the current quarter to a year ago does not give an accurate picture, but compared to first-quarter data, home sales showed solid growth in all counties. Bonner and Kootenai led the way in the north, and Boise and Blaine in the south.

❱ Year-over-year sales showed significant growth in all of the Northern Idaho counties contained in this report. In the southern part of the state, sales soared in Blaine County, were modestly higher in Boise and Gem counties, but were lower in all other markets.

❱ Pending sales rose 3.4% from the first quarter of this year, suggesting that the third quarter will be positive. This may also be aided by higher levels of inventory, which were up almost 55% compared to the first quarter. 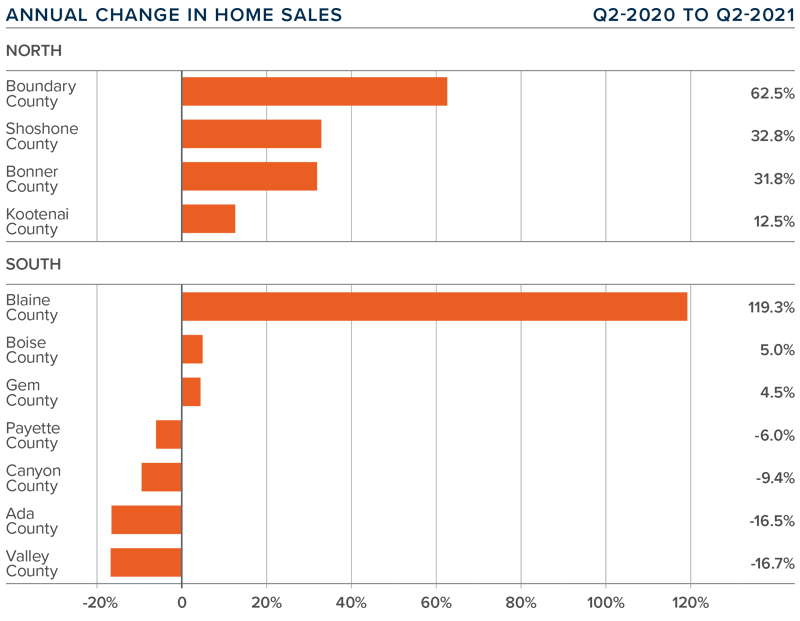 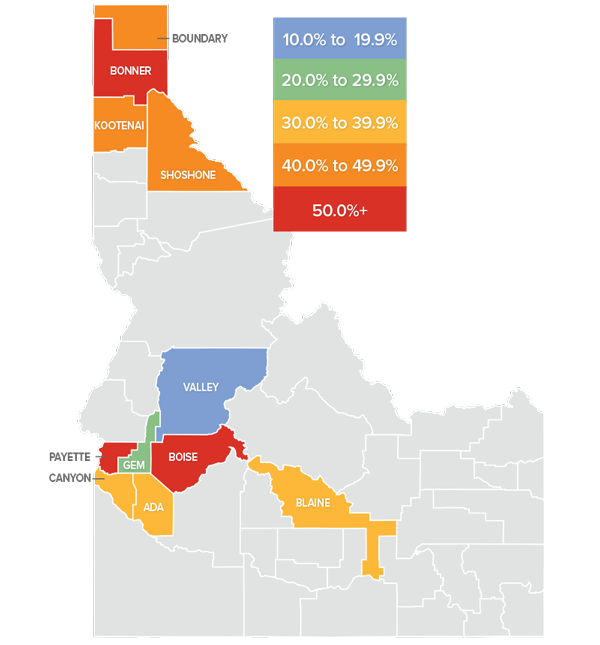 ❱ Southern Idaho also saw significant year-over-year gains. Boise County jumped almost 67%. Of additional note was that prices were only .6% higher in Southern Idaho compared to the prior quarter.

❱ Prices rose year over year by at least 47% in all Northern Idaho counties covered by this report, and they were 9% higher than in the first quarter of this year. Some suspect that prices are being driven up by an increase in buyers from nearby Spokane, Washington moving to Northern Idaho where prices and supply are better, and it’s close enough to commute to Spokane for work.

❱ Buyers still outnumber sellers, which resulted in steep price increases. This may also be a function of mortgage rates rising in the first quarter, which nudged more buyers off the fence even as inventory levels remained very weak. 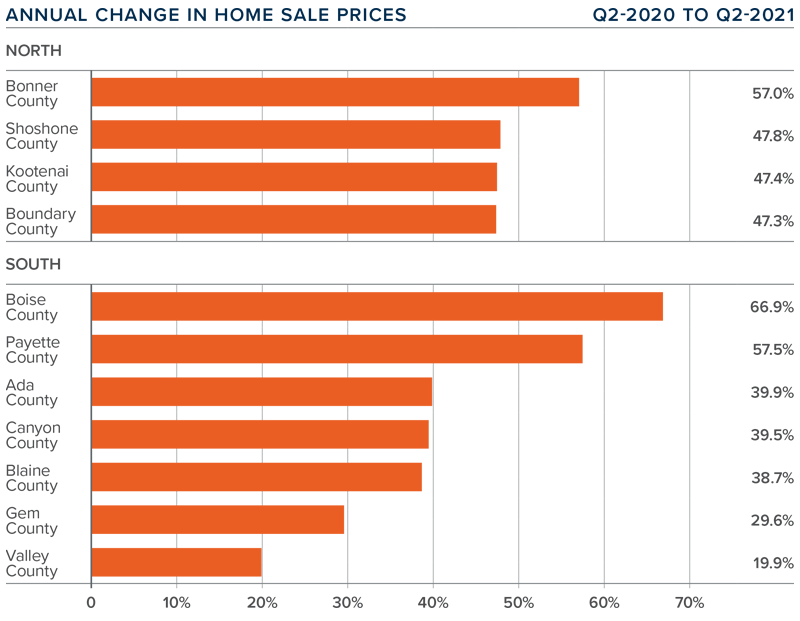 ❱ It took an average of 68 days to sell a home in Northern Idaho, and 36 days in the southern part of the state covered by this report. 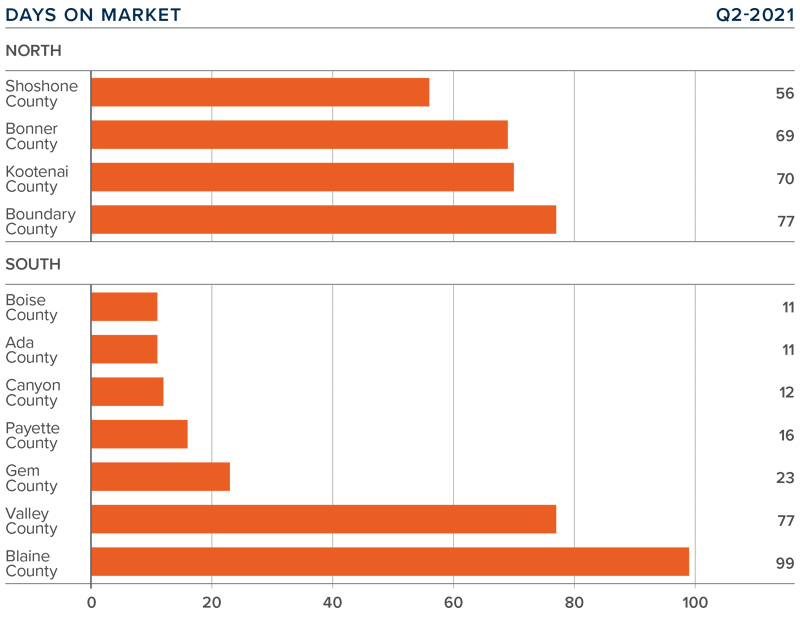 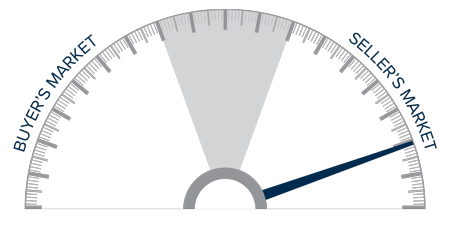 The economy continues to perform very admirably, and this is allowing buyers to become even more confident in their decision to buy a home. Mortgage rates have pulled back, and while I expect them to tick higher as we move through the year, they will still be remarkably low from a historic standpoint. Inventory levels have risen, but demand is still outpacing supply. Therefore, I have moved the needle more in favor of home sellers.