In what has already been a banner year for the Windermere Foundation, the inaugural Windermere Foundation Gala took things to new heights. Held on the evening of September 30 at the Sheraton Grand in downtown Seattle, Windermere agents, owners, and staff dressed to the nines for a night of live entertainment and fundraising for low-income and homeless families throughout the Western U.S.

With 2022 being Windermere’s 50th anniversary, the company set its sights on reaching $50 million in total donations for the Windermere Foundation by the end of the year. At the end of 2021, the grand total stood at $46 million raised since the Foundation began in 1989, leaving a roughly $4 million gap to reach the $50 million goal. Through the spring and summer, we saw an outpouring of support as Windermere offices around the network stepped up their fundraising and giving efforts. By the end of July, total year-to-date donations surged past $2 million, pushing the grand total to nearly $48 million.

Then came the night of the Gala, during which the Windermere Foundation would receive the Excellence Award from the 5th Avenue Theatre. Windermere founder John Jacobi and family accepted the award on behalf of Windermere and expressed their commitment to continue their legacy of giving both personally and through the Windermere Foundation. But the Gala was more than a celebration; it was a massive fundraiser, with proceeds from ticket sales, table purchases, donations, and auction bids going back to communities throughout the Windermere footprint. 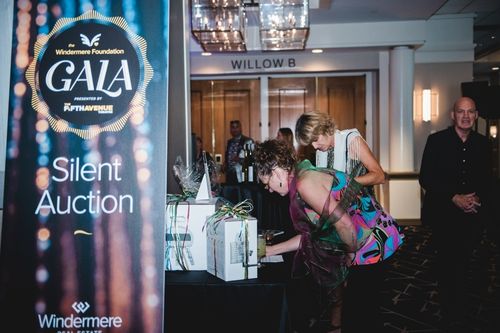 As the Gala attendees entered the foyer of the Sheraton Grand Ballroom, they bid on silent auction packages displayed throughout the room. Up for auction were locally curated experiences and goods alike, including multiple-night stays at luxury resorts, tickets to a Broadway production, and more. Next was the live auction. Bids went up for 11 special packages, including a skiing adventure at an upscale resort in Park City, a guided fly-fishing excursion in Montana, and others. As part of an exclusive Pearl Jam auction package, their guitarist Mike McCready was in attendance, adding his signature on stage to an electric guitar signed by the band members. 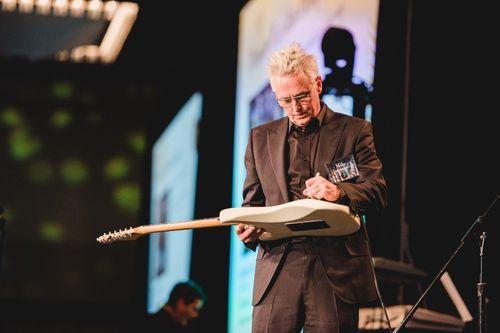 Finally, the Gala attendees participated in Raise the Paddle, where they contributed donations at different levels. Windermere founder John Jacobi kickstarted the giving with a $100,000 donation, and from there, auctioneer John Curley guided the audience through descending levels of support, calling out bidder number after bidder number in what was an outpouring of giving from the audience. The Windermere network more than doubled the $250,000 goal of Raise the Paddle, ultimately raising $520,250 in donations.

In total, the Windermere Foundation Gala raised $1.6 million, catapulting Windermere towards its goal of reaching $50 million in total donations by the end of 2022.

To learn more about the Windermere Foundation, visit windermerefoundation.com. To help support programs in your community, click the donate button below.

Related Articles
More Windermere-UW Aspire Internship Grows in Second Year Written by: Samantha Enos – Vice President of Diversity, Equity, and Inclusion, Windermere Real Estate Formed in partnership with the University of Washington College of Built Environments, Windermere’s Aspire internship program launched in July 2021. The internship offers financial support, mentoring, and skill-building through academic and professional office settings to students, with a focus on […]
More Windermere Partners with Seattle Seahawks for 7th Season of #TackleHomelessness With the dawn of a new football season comes the opportunity to give back to our community. As the “Official Real Estate Company of the Seattle Seahawks,” all of us at Windermere look forward to partnering with the team for the seventh season of #TackleHomelessness. For every defensive tackle made in a home game this […]
More Windermere Foundation Surpasses $1.5 Million Raised in 2022 After setting a goal to reach $50 million in total donations in honor of Windermere’s 50th anniversary, the Windermere Foundation is getting closer to reaching that goal thanks to the $1.5 million that has been raised so far this year. After ending last year with a grand total of over $46 million in donations, that […]