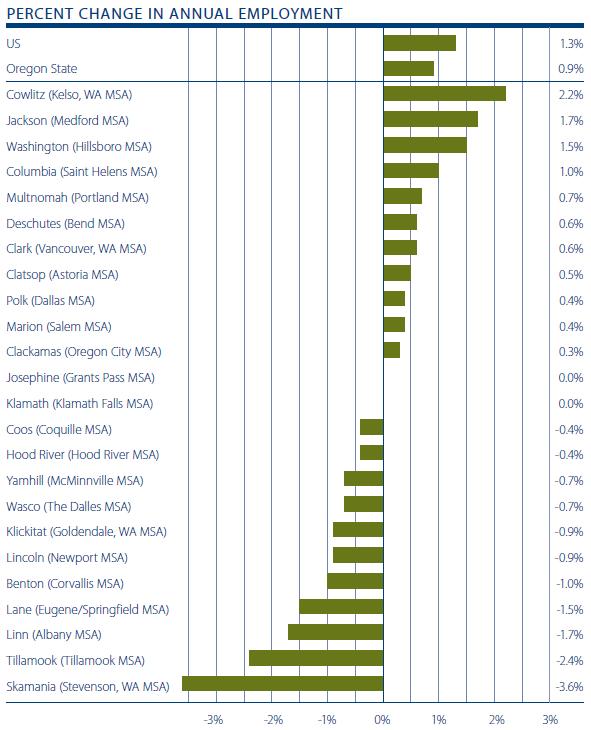 There are two ways to look at the current employment report for the market. The first is that job growth remains painfully slow, with 13 of the 24 counties shedding jobs year-over-year, and an overall expansion of the job base by a meager 7,232 or 0.4%. The other—and certainly more positive way—is to compare this report with the prior quarter where just two counties lost jobs and we experienced an overall growth rate of 26,439 or 1.6%. I prefer the latter and will focus on that!

It is interesting to note that the overall unemployment rate declined across the board when compared to a year ago. This tends to be a function of a decline in the participation rate, which represents the number of people who are either employed or are actively searching for work. During periods of contraction, many workers get discouraged and stop looking for work which actually (and artificially) improves the unemployment rate.

I am giving the employment situation a “C” grade this quarter, up from the “D” that I gave it in the prior quarter. I had expected to see an improving job market in the first quarter, but it looks as if perhaps I was just a little premature in my forecast.

The numbers look pretty good, but I want to see consistent quarterly improvements before I start to feel comfortable with stating that we are in full expansion mode. 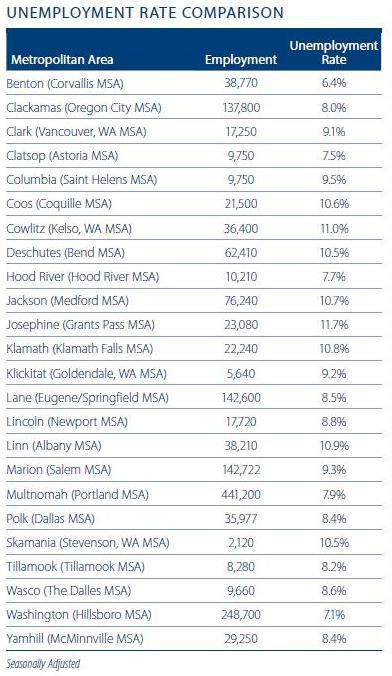 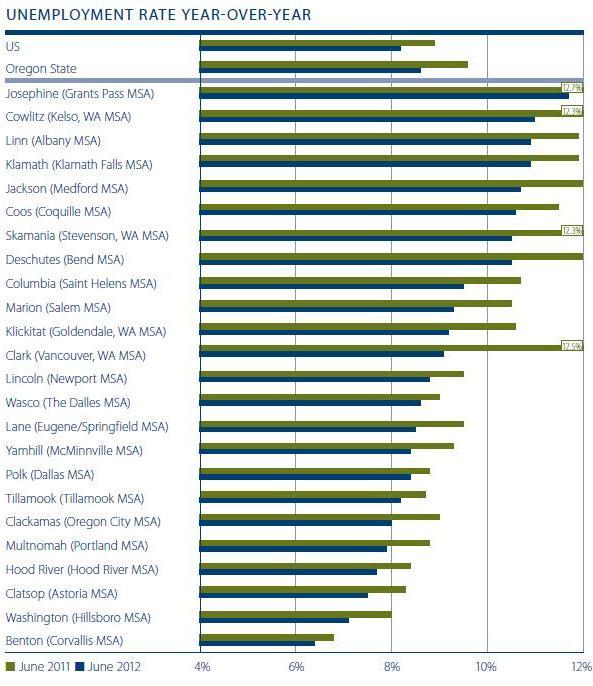 Home sales continued to expand with 19,394 transactions—an increase of 8% from the same period in 2011. Year-over-year we note that all but four counties saw improving sales.

When we compare sales velocities over the previous quarter, all but one county exhibited improvement, suggesting that the spring market did arrive; it was just a little late! The only market where sales slowed was in Skamania County and the drop was marginal.

Year-over-year, the greatest improvement was seen in Hood River (+44%), Clatsop (+31%), Skamania (+28%), and Polk (+24%) Counties. There was only one county where declines were in the double digits, and that was in Cowlitz County where sales were 13% lower than during the first half of 2011 but, even here, the market has showed dramatic improvement over the first quarter of 2012.

From a transactional standpoint, the data shows solid improvement, but there is a caveat: units available for purchase declined across all the counties surveyed—and this is a concern. Although most markets saw a modest uptick in listings during the quarter, the number of units for sale is down substantially from a year ago, as well as the long-term trend.

Much of this can be attributed to the slowdown in banks listing foreclosed homes for sale, as well as homeowners with negative equity waiting to list their homes until prices rise sufficiently to enable them to sell and not owe money to their mortgage holders.

Choice in many markets has become limited which, if it does not improve, will likely lead to a slowdown in transactions in the second half of 2012. 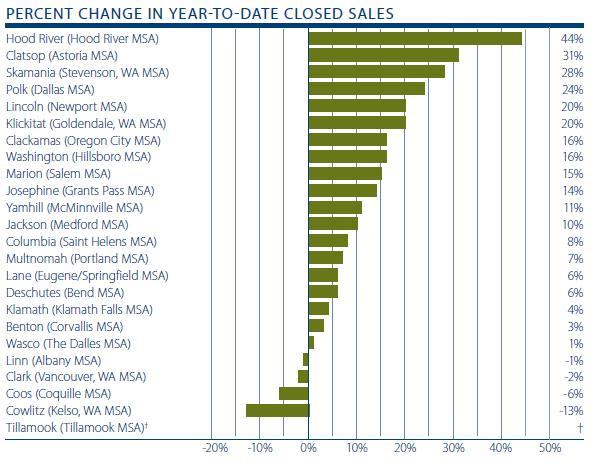 Turning our attention to home prices, 14 of the markets analyzed registered year-over-year price increases (up from nine in the last report) with nine showing declines in values from a year ago. In aggregate, the markets surveyed saw values increase by 2.8% over the same period in 2011.

Other than the substantial 40% growth in the relatively small Clatsop County market, four other counties registered double-digit gains from June 2011. When compared to prices seen in the first quarter of the year, 21 counties are higher with just three declining.

Overall, I give the real estate market a “C” grade this quarter. This is up from the “D” that I gave it last quarter, but the concern discussed above—and its potential to negatively affect sales volumes as well as price—are still weighing on the grade. 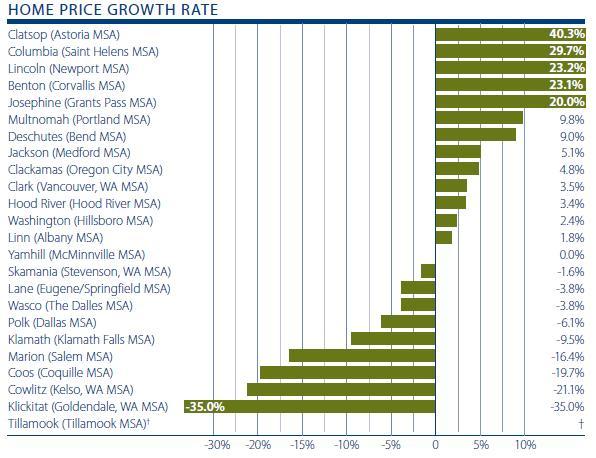 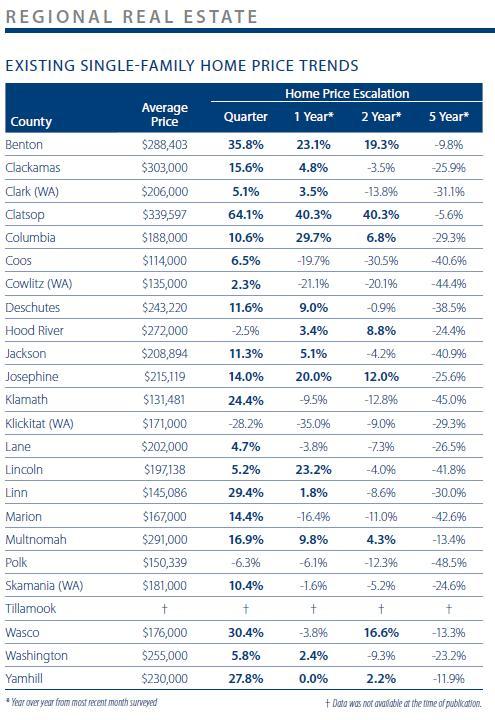 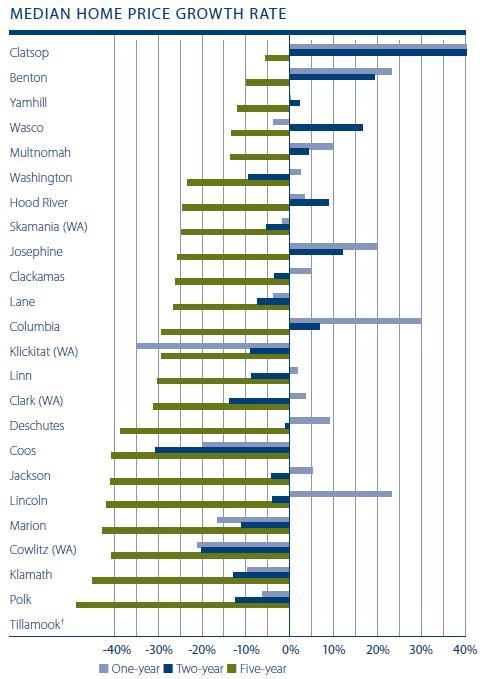 The Oregon economy showed much-needed improvement this quarter, which is encouraging. As I have stated before, home values and employment growth are intertwined and as one goes, so the other will follow.

Employment growth picked up quite nicely in the last quarter and I am looking for this to continue at a modest pace through the balance of the year. It will not be easy though, as I anticipate that the government sector will continue to shed jobs, therefore putting the onus on the private sector to create a vast majority of the expected job growth.

The housing market appears to be starting to find its legs but I remain cautious as to exactly what direction it will take. Distressed listings have taken a breather, but there are still significant headwinds as the proportion of homeowners with negative equity remains high and, if we see a pickup in repossessions, the recent increase in home values will, no doubt, be dampened.

That said, the spring market for jobs and housing has arrived—albeit a little late. I will be very interested to see if the recent improvement that is evidenced by this report continues through the summer.