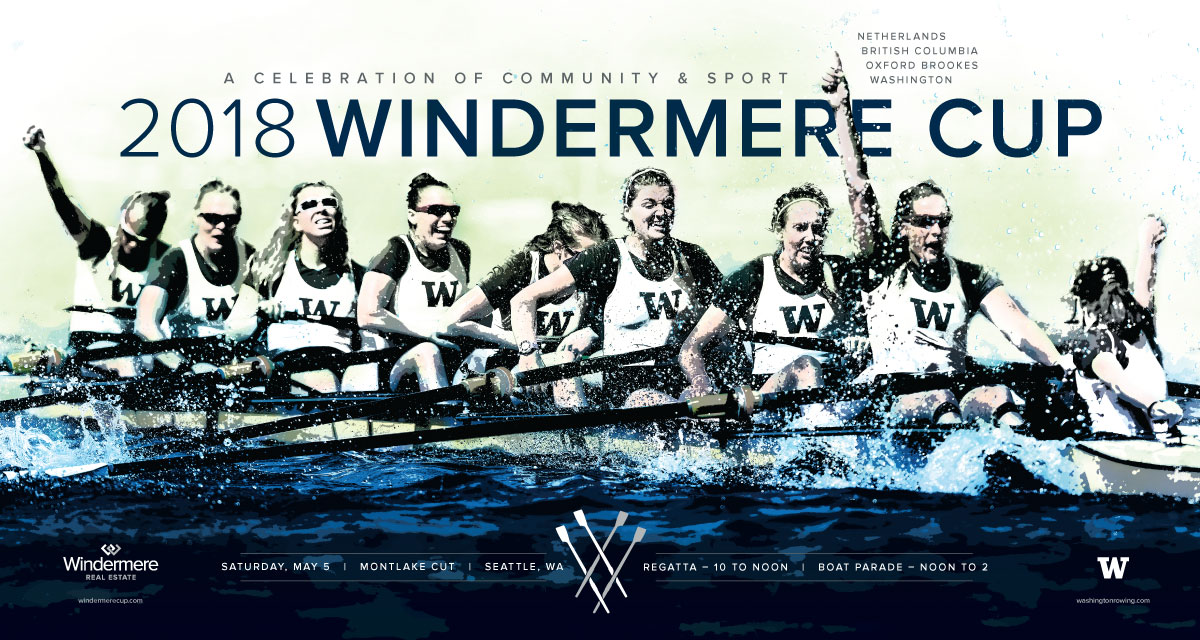 On May 5 the Montlake Cut will play host once again to the Windermere Cup rowing regatta. For the past 32 years, Windermere Real Estate and the University of Washington have joined together to host this event, which brings the world’s best crews to Seattle to compete against the perennially acclaimed UW men’s and women’s teams. Held annually on the first Saturday in May, the Windermere Cup is both an international sporting event and opening day party, followed by the world’s largest boat parade.

The races will be headlined by four of the strongest crews in the world. On the men’s side, UW Rowing will be opposed by two strong squads. Oxford Brookes University is the defending collegiate champion in Great Britain, and the University of British Columbia holds the most recent collegiate title in Canada. Both will oppose a Washington men’s crew that has been the most dominant program of the decade in the United States and missed out on a national championship by less than a tenth of a second in 2017. The reigning national champion UW women will be opposed by the Dutch national team, which recently placed 6th in the world at both the World Championships and the 2016 Olympic Games.

In addition to the 23 crew races throughout the morning, the family-friendly Windermere Cup event also includes food vendors, booths to purchase UW and Windermere Cup apparel and commemorative gear, as well as a bouncy house for the kids. Admission to the event is free.

The crew races start at 10 am and end around noon. Following the final Windermere Cup race is the Seattle Yacht Club’s Opening Day Boat Parade. Download the Windermere Cup App by downloading Attendee Hub, available on the App Store for both Android and iOS. There you can access schedule and team information, event details, and more! For live race results: https://event.crowdcompass.com/w18c

Windermere Party on the Cut:

This year’s pre-race Party on the Cut will take place Friday, May 4th, from 6 PM to 10 PM. Join us on the Montlake Cut for an evening of live music, lawn games, and food and drinks. $25 gets you into the beer garden where you can hear live performances by Groove Surfers, Brian DiJulio & the Love Jacks, and Spike & the Impalers. Kids get in for just $10, and tickets can be found through Brown Paper Tickets.

This book is about the athletes, colorful characters, and brilliant people the Windermere Cup rowing regatta has featured every first Saturday in May since 1987. Through interviews, original documents and pages upon pages of breathtaking photographs, author Gregg Bell captures this event’s more than 30 remarkable years, its spirit and its soul.

The Windermere Cup is a touchstone for our company, our family of offices and agents, and the University of Washington. Not only is this an international sporting event, it’s a celebration of camaraderie, teamwork, and community – and truly great tradition that we are honored to be a part of.

Related Articles
More Windermere Launches Redesigned “People First” Website Windermere Real Estate has launched a redesign of its website Windermere.com as a part of the company’s brand refresh evolution that started with new logos and more modern branding two years ago, followed by the launch of the company’s “All in, for you” brand campaign in 2019. Windermere Marketing VP Julie Dey said it was […]
More Our Commitment to Change: A Message to Our Community At Windermere, we are committed to doing our part to address discrimination, racism, and inequity within our company and the real estate industry. Learn more about what we’re doing:
Buying Ask an Agent On Windermere’s “Ask An Agent” Instagram Live series, radio personality and Windermere client Carla Marie talks with our agents about all things real estate, answering audience questions to simplify the complexities of home ownership.