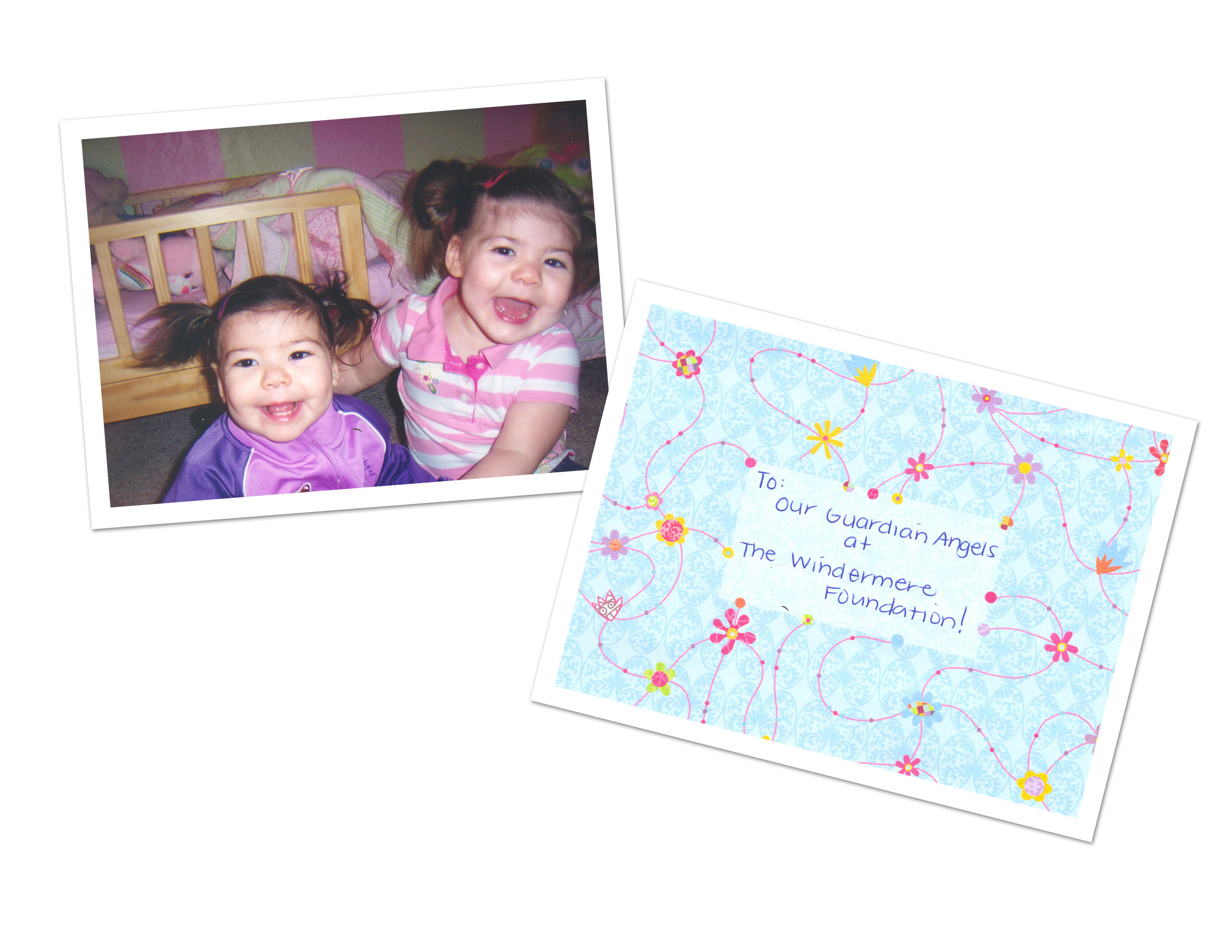 This week I’ve included a sweet letter from a family who was referred to the Windermere Foundation by a social worker from Children’s Hospital. THIS is what it’s ALL about!

We want to send you our biggest THANK YOU for your very generous gift you have given us. Words cannot explain how much this means to us and how greatly this will help us out to continue to raise these beautiful little girls.

Almost exactly a year ago (March 14, 2008), Morgan and Hailey, who were 1 & 2 years old at the time, entered our lives. They had the unfortunate experience of being removed from their home and away from their two older sisters as well. Having known the parents, and not wanting to see these girls go into the foster care system, James and I were given the opportunity to take them in under our wings for a few months so the parents could get their lives straightened up. So we brought them to our one bedroom apartment in hopes it would work out. Well, to make a long story short, what was supposed to be a 3 month experience turned into a year long (and still going) life altering excursion for us. After we knew that it was going to be a longer stay, we decided in May, to move into a bigger house to give us some space and room to grow. Being still young (well sort of…29) and haven’t had a child of my own yet, nor married, nor even changed a diaper before (seriously) this was more than I had ever expected it to be.

Hailey (1 yr old) was severely malnutritioned and required serious medical attention. She was throwing up approximately 5 times a day, and not able to keep anything down. After contacting Children’s Hospital, we were scheduled for multiple specialists to get to the bottom of what was wrong with her before it was too late. In May 2008, we had an appointment with a GI specialist who finally found the problem. Hailey had been born with part of her intestine grown together. Just a pinpoint hole was allowing enough formula to basically drip through and miraculously sustain life. Upon her admission to have surgery at Children’s that same day, the surgical staff needed to incubated her prior to surgery, which involved putting her on a vent and helping her breathe manually during this procedure. Since the father had smoked around all of the children in the home, many of them suffer from asthma. Hailey being the unfortunate one who has it severely. When they attempted to put her on the vent, Hailey had an asthma attack and in turn went into respiratory failure. So what was supposed to be approximately a 3 hours surgery with some recovery days, turned into more than a month of rehabilitation and recovery. Not to mention the day before Hailey was supposed to be discharged at the end of June, Morgan, her older sister who was 2, came down with viral meningitis and had to be admitted for 3 days at Children’s Hospital as well. Living in Lake Tapps was not an easy commute for us to Children’s everyday, let alone the time we were missing at our jobs. Unfortunately, I had to cut my hours to accommodate all of the weekly follow-up appointments, physical therapy appointments for Hailey, speech therapy appointments for Morgan, parental and sibling visits and social worker home visits. Going from a dual income in a one bedroom apartment to a single income, 3 bedroom house, and two extra people definitely took a toll on us. We manage to get through day to day with the support we have from both of our families. Children’s Hospital, especially Kath Price, were huge supporters as well. Having both of us working in the medical field as EMT’s, never have we seen a more organized, friendly and helpful hospital ANYWHERE!!! And having to basically live there for more than a month, we got to know the staff really well. Kathy was always there for support, whether it was for advice or just to listen.

Recently, I have not been able to work much, if at all, because of all the places we have to be, and things we have to do that are mandated, not to mention the slowing of work has caused them to cut everyone’s hours as well. This has put us further and further behind on bills. We opted to put them on the back burner to be able to live day to day on one income and the little amount we received from the state. When we thought about having to return these girls to the state to keep us from all failing at this, our hearts just couldn’t do it. We literally contacted Kathy Price as our last resort. I asked her for some numbers, websites that we could go to for help with anything. She emailed me promptly with news that she contacted your foundation for a grant.

Within a day or two, we got the heart dropping news of your generous gift. We never had our hopes up just in case nor did we expect you to help out as much as you have. I cannot explain to you how much this means to us. We still have a lot of work to do to catch up, but this will definitely help us turn it around in the right direction, and give us the positive lift we needed. We never thought in a million years there would be people like you that would do such a wonderful selfless thing for a family in immediate need. It took so much for us to even ask for help because we were so embarrassed to and just thought we would get the run around because we “make too much,” since that’s what everyone else kept saying. After all is said and done, I am so happy we did and even happier that we have your foundation as a part of our lives. We would love the opportunity to come meet you in person and thank you face to face. Just let us know whenever it’s a good time. We travel to Children’s frequently, and I believe that’s in your area.

Thank you again (times a zillion) for your generous contribution to us. In the future we would love to be there for another family in need. Please let us know what we can do to help, even if it’s donating time. I am always about giving and not receiving so repaying you in a way that I can is my utmost intention. I enclosed a pic of the girls, Morgan (3 now) on the right and Hailey (2 in a couple weeks) on the left. So you can see what beautiful girls they are and to see what your good cause went to support. I can’t thank you enough, so one last time THANK YOU!!!